The numbers of the Iguana delicatissima are declining, as is the case on the Dutch Caribbean island of Sint Eustatius (Statia). Terrestrial ecologist Hannah Madden started a crowdfunding to try to help protect this animal. "Conservation of the species will be a huge success story for the island."

"Historically this species is known to have existed throughout the Northern Lesser Antilles, from Anguilla to Martinique", Hannah Madden says. Madden is a terrestrial ecologist who started the crowdfunding campaign. "Now, genetically pure populations of the iguana only remain on a handful of islands, including Statia." The iguana has existed on Statia for thousands of years, but is listed as endangered by the International Union for the Conservation of Nature (IUCN) with a declining population status. The population size of this iguana has plummeted to just a few hundred. For a healthy population, this number should ideally exceed 5000 animals, according to experts. Madden states: "The Lesser Antillean Iguana is an ambassador species that represents an important component of Statia’s biodiversity."

To eliminate the threat of an invasive species Madden started a crowdfunding campaign. "With the funds donated we can now cover the expenses of two experts who will assist with fieldwork from mid-November. The campaign also creates awareness for the species and the ongoing sister project, SOS Iguana", Madden says. "Any additional funds will be used to purchase field equipment such as poles, PIT tags, flashlights and other materials. It is hoped that the upcoming field mission will result in the team finding any unwelcome invasive iguanas, and separating these from the vulnerable native population."

Iguanas are not warm, furry creatures and often do not evoke the same emotional reactions as pandas or tigers. Yet, they form a crucial part of the ecosystem. The campaign also hopes to convince the general public that this species deserves as much protection and preservation as other, more attractive, species. "Thanks to support from overseas partners such as the International Reptile Conservation Foundation, Ty’s Lizards and Blijdorp Zoo we feel that we are making some headway, but there is still much work to be done", Madden says. Follow the progress on Facebook and Twitter.

All the partners actively involved in this project, STENAPA, EcoPro, RAVON and Van den Burg, have been working closely with this species over the last decade. Madden: "We believe that we need to work fast in order to eliminate the threat of an invasive species.Experiences from other islands concerning the arrival of the Green Iguana and subsequent hybridization with the Lesser Antillean Iguana have taught us that the process of hybridization and local extinction of the latter species can happen within just a few generations. Therefore, it is important to act as quickly as possible once the invasive Green Iguana comes to a new island. Conventional funding is often a time-consuming process, so we tried to find a faster way of collecting the necessary funds. We felt that crowdfunding could work quickly and effectively, as making a new campaign via the internet can be done within one day, and we are pleased to report that within just two weeks of launching we raised over $4,000 through Generosity, plus additional funds from other donors. Nevertheless, the campaign is still open and any additional funds will enable us to continue this essential work; therefore we urge everyone to consider making a donation, no matter how small."

English version of Change Magazine and magazines published in English 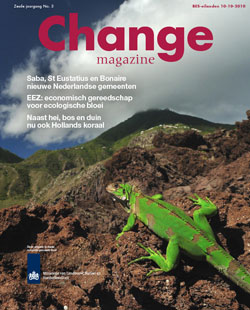